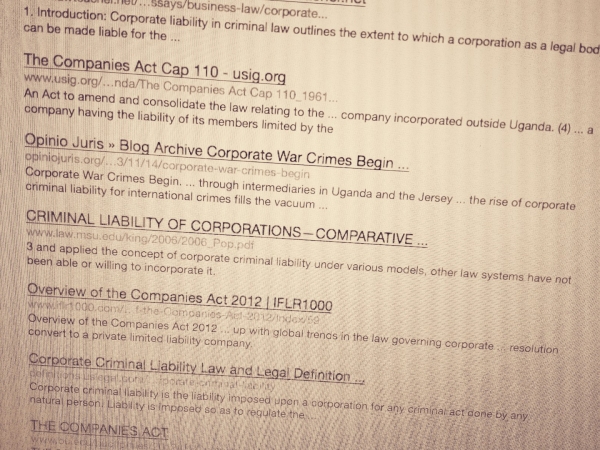 As a general rule, common law does not impose a criminal liability on corporations. Corporations are legal persons that have their own identity or personality independent and or separate from its directors and shareholders. The owners enjoy the benefit of limited liability wherein they are not liable for the company’s debts or other obligations personally.

In the celebrated case of Salmon vs. Salmon [1897] AC 22, Lord MacNaghten stated that, “The corporation is at law a different person altogether from the subscribers.” This separation extends also to directors. However, there are instances where this separation (corporate veil) can set aside to apportion blame especially on the directors.

In the Ugandan case of Commodity Export International and Another vs. MKM Trading Company Ltd & Another Civil Suit No. 298 of 2001, court noted that ‘the legal personality of a company does not protect a director or a shareholder for the purpose of defrauding the company, itself or members of the public. This case denotes the long held common law position on circumstances that a company’s corporate veil can be pieced in. The company is never held liable for any wrong but the directors and shareholders can be held liable where company, directors or members of the public are being defrauded.

The companies Act provides for regulatory/statutory offenses for officers, directors and members who engage in fraud, misrepresentations, and misfeasance for which penalties range from fines to imprisonment for life. There are penalties for false statements, improper use of the word “limited” that go against such officers or persons who offer false statements.

Where a Registrar has reasonable cause to believe that the provisions of the law are not being followed, he/she may call on the company concerned to produce all or any information in writing. The Registrar may then cause a company to be investigated on application of members to court. The grounds on which the investigation is premised include among others: the company business is being conducted with intent to defraud its creditors or other persons; fraudulently or for an unlawful purpose; in a manner oppressive of any part of its members or that the company exists for a fraudulent or unlawful purpose.

The effect of these investigations can lead to winding up of the company if it is found to be expedient. In public interest proceedings may be brought against such company for the recovery of damages in respect of fraud, misfeasance or misconduct.

It is safe to say that in Uganda, corporate entities do not bear a legal responsibility for the actions of its directors, shareholders or other officials acting in the course of duty. Where such persons are found to have acted ultra vires, they are held personally liable. It is only in circumstances that a company is unable to pay its debts that its most often wound up. Situations of companies being wound up for fraudulent conduct of business and internal mismanagement are unbelievably very rare if any. Knowing this position, many people have incorporated companies to deal in business and have thus ended up committing crimes like corruption, bribery, abuse of office for which they can not be personally prosecuted because of the corporate shield or veil. This calls for a targeted

Demystifying the corporate veil Over the years, some three basic theories have been developed and still continue to develop by which corporations may be held responsible for statutory or other crimes. These are vicarious liability; identification theory; and the third is locating fault in the corporation’s organizational structures, policies, cultures and ethos. Under vicarious liability, a master is held responsible for the wrongs of a servant. The master need not be personally liable for such an act or omission. This responsibility is assignable to both individuals and corporations. The second theory of Identification is where the state of mind or the directing mind of the corporation is attributed to the corporation itself. Both Canada and England use this theory. The only difference is that the Canadian courts can locate the directing mind in lower ranks of officials as opposed to English courts.

The development of the theories for a long time, the courts interpreting the common law of England and Canada could only hold a corporation liable under vicarious liability (the doctrine of respondent superior). This was accommodated in torts but not for crimes since crimes require mens rea.  In the twentieth century, courts began to disfigure the corporate veil by holding that companies could be liable for fines; later, companies could be held liable for offenses committed by its officers rejecting notions that such offenses are ultra vires; and later by attributing mens rea to corporations in the land mark case of Lennard's Carrying Co Ltd v Asiatic Petroleum Co Ltd [1915] AC 705. In Lennard’s case, the issue in contention was whether the fault of a director who was actively involved in the operation of a company was in law the fault of the company. Lord Viscount Haldane stated:

“A corporation is an abstraction. It has no mind of its own any more than it has a body of it’s own; its active and directing will must consequently be sought in the person of somebody who for some purposes may be called an agent, but who is really the directing mind and will of the corporation, the very ego and the centre of the personality of the corporation....”

This theory which subsequently became known as the ‘directing mind’ theory was applied in the Canadian case of R v Fane Robinson Ltd., [1941] 3 DLR 409 wherein court held that since a corporation could enter legally binding agreements with individuals and other corporations, it could be said to entertain mens rea (that vital blameworthiness for criminal liability). In this case, the corporation and two of its ‘directing minds’ were convicted of conspiracy to defraud and obtaining money by false pretenses.

Being hit by a spate of large-scale corporate corruption scandals, which have brought into sharp focus the role of India's corporate sector in the problem of corruption in India, the Indian courts have joined the Canadian and English courts in attributing criminal liability to corporate organizations. In India’s recent past there existed a jurisprudential dilemma, which lay in the heart of increased criminality and corruption in both public and private sectors.

Previously, the courts took a position that when a statute imposed the punishment of imprisonment and fine, it would be hard to enforce and unworkable. This position was overruled in the case of Standard Chartered Bank & ors v Directorate of Enforcement & others CASE NO.: Appeal (civil) 1748 of 1999 wherein it was decided that in as far as a company is concerned, punishment and a sentence of fine could always be imposed, while the sentence of imprisonment could be ignored as it is impossible to be carried out in respect of a company. Court reasoned that, no company or corporate body could be prosecuted for the graver offences if a contrary view was held. Following that landmark decision was the case of Iridium India Telecom Ltd V Motorola Incorporated & Others, Criminal Appeal No.688 Of 2005 where the Supreme Court of India sealed the argument by conclusively adopting the identification theory. In Iridium case a company was charged with offences of cheating and criminal conspiracy on the basis of alleged false representations made by the company. Rejecting the argument that a company cannot possess the requisite mens rea to commit a crime, the court held that a corporation is virtually in the same position as any individual and may be convicted of common law, as well as statutory offences, including those requiring mens rea.

Court reasoned that the criminal intent of the 'alter ego' of the company or corporate body, (the person or group of people that guide the business of the company), would be imputed to the corporation....

Under the Prevention of Corruption Act 1988 of India, a company that has been convicted of a corruption or bribery crimes could be held liable to pay fines. In circumstances where court holds that it is just and equitable to do so, such a company can end up being wound up.

Civil proceedings may be brought by government in the name of the company for recovery of damages against delinquent directors, as well as for recovery of property that has been misapplied or wrongfully retained. Criminal proceedings may be instituted against the officers of the company; S.166 of the Companies Act of Uganda contains similar provisions with respect to dealing with companies or its officials who indulge in fraud, misfeasance or illegality.

There are instances where also the Directors of a company are jointly charged with the company and fined or imprisoned.

There are options to explore where a company with a criminal record could be denied certain opportunities especially of offering services or goods to the public through the formal Public Procurement processes.

To date, the perceivable jurisprudence in this area in Uganda seems to tow the traditional approach to corporate law where companies are given separate legal personality from its directors or owners. This has in sundry times led to escape from personal liability through being shielded by the corporate veil. Even where the veil could be pierced, the law does not seem to attribute criminal liability to companies as much as it does to human beings.

In the Penal Code Act, the definition of a ‘person’ is used in reference to ownership of property to include corporations of all kinds and any other association of persons capable of owning property, and also when so used include the Government.

With the recent case of Uganda v Prof. Dr. Gilbert Bukenya and Motorcare (U) Ltd before the Anti-Corruption Court, relevant questions arise as to the necessity of a shift in our jurisprudence: did the parliament envisage the adoption of the identification theory and thus a permanent removal of the shield of corporate veil? Could the Inspector General of Government be advancing the need for courts to levy criminal liability on Companies? What does this spell for companies in light of their in-door management? What does this spell for the fight against corruption in the corporate sector in Uganda?

With the aid of the doctrine of persuasive precedents, Uganda stands a high chance of answering these questions. These questions further afford a rich opportunity for research and also development of jurisprudence with respect to Corporate Criminal Liability in Uganda.